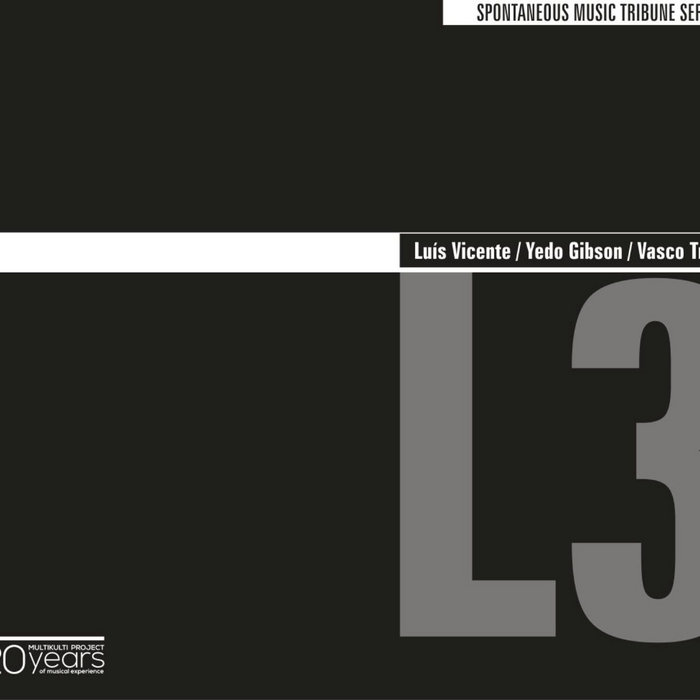 Since Catalan drummer and Brazilian reedist Yedo Gibson officially sealed their creative bond with Inherent Chirality (2015) on Belgian label El Negocito Records, their incomparable synergy has been documented to great effect. They joined forces with bass player Hernâni Faustino (Chain, No Business), and became part of a Portuguese band of heavyweights – with Ernesto Rodrigues, Miguel Mira and Luís Lopes – that released Nepenthes Hibrida on Creative Sources. Their duo intensity came once again to the fore on Antenna, the fourth episode in the Multikulti Project/ Spontaneous Music Tribune Series.

It is to the same series that they now return with another Lisbon compatriot, trumpet player Luís Vicente. As a member of bands like Fail Better!, Deux Maisons, Chamber 4, In Layers, Clocks And Clouds, Twenty One 4tet and some ad hoc constellations, Vicente has been moving in steadily centrifugal circles, exploring the challenges of the modern-day improviser with an eagerness and virtuosity that has both skill and instinct in equal measure. He is rooted in jazz, but adept at extended techniques, accepts no borders and has become a non-idiomatic practitioner whose name keeps turning up in the current wave of young, European improvisers.

That these three would go on to create something special, an eccentric trio language, is perhaps not that surprising, but the fluidity with which they do it shouldn’t be taken for granted. This album not only has the tight brevity of punk rock, but also that manic energy and refusal to waste any ideas. Reveling in abstraction and a near-delirious freedom, the threesome sets out to overturn the classic goals and ambitions of a working trio. With a combination of reeds and trumpet, you’d expect melodic/motivic ping-pong and a frontline spurred on by a rhythmic force, but those roles/rules and expectations are resolutely disposed of.

Trilla, while perfectly capable of sustaining intensely stimulating and rotating patterns and grooves, acts as a sound generator, his drum kit a resource of nuance and variety. Machine-like hisses, endless resonations, explorations of metal and wood, gusts of percussive rain. If he were a painter, you’d get it all: delicate spatter and massive color surfaces, soft strokes and manic smears. Everything but an easily identifiable, figurative approach that gets its inspiration from elsewhere. While that might suggest a method of randomness and chaos, it is actually how focused and attuned he is to his colleagues that makes it so interesting.

Gibson and Vicente use a language that is anything but commonplace. They dismiss conventional melody and motifs, even simple notes, for something different. Animalistic hums and roars, throaty rattling, little squeaks, plops and puffs. Their approach is one of shrill overtones, simmering saliva and ecstatic bird calls. Turn it up and you will find yourself in a deranged zoo. Play it backwards, and who knows what kind of madness you will encounter. The thing is that they turn a whole bunch of conventions upside down, but do it with a distinct flavor and near-combustible intensity, avoiding ready-made clichés.

There are references for this kind of interaction, of course, and perhaps the combination of John Butcher and Gino Robair comes closest for the interplay of the already established duo, but with Vicente added to the mix, you end up in new surroundings with a strikingly original identity. As with many other excellent improvised records, however, it is not only what you hear that makes it worthwhile, but also the questions – about roles, a common language, the nature and possibilities of improvisation – that arise. So, don’t be fooled by the record’s brevity. It rewards the attentive listener in the long run. Something to treasure in this era of disposable experiences.


Some brief background: Yedo Gibson became a very good friend of mine many years ago when he lived in London. He also later stayed with myself and my partner Jill before moving to the Netherlands where he studied music academically.

He improved his English by talking with me a lot about music. We also collaborated on music projects playing live gigs in London as well as doing a project that was recorded and broadcast by BBC radio4.

The project: So to hear him now is really quite amazing, playing with two very like-minded and connected musician friends of his – Vasco Trilla and Luis Vicente. The first thing I hear in this music with the opening piece is a huge strength of conviction. The sounds are bold and brave, transgressing the neat, manicured boundaries of harmony, melody and rhythm.

Human flesh flutters and blusters on subtle metal alloys to create anthropomorphic sounds from rarefied beasts who seem to dwell within the deep recesses of these musicians' imaginations.

After hearing the music once or twice I decided to cook a meal while listening to it in the kitchen. Jill was also in there and I decided not to make any reference to it. After several minutes I heard her laugh and then she said to me how she loved this music. I asked her if she had any idea who it was......she had none. That night our meal tasted good.

It is truly beautiful music with an enormous range of dynamics in colour and texture, and all held together by the glue of friendship within spontaneous collective music improvisation.

As a result of this, the pieces all have a clear focus and a well-defined shape. Each one has its own strong character and identity giving the whole 'set of eight' a sequence of subtly contrasting movements within the larger frame of the whole piece of music, i.e. the recording project itself.

Rather than boringly give you my own verbal description of each of the eight pieces all I need say is “discover them for yourselves” and I hope you enjoy them as much as we still are.

All music by Vicente, Gibson, Trilla